Depression and Traumatic Brain Injury: The story of Ann

Depression and Traumatic Brain Injury: The story of Ann

This post is about a woman I worked with last year to help her get relief from life-long depression.  Depression is characterized by melancholic symptoms, anxiety, fatigue and somatic symptoms. I’ll call her Ann to protect her privacy.

Ann is a woman in her 60’s that had depression since she was 25 years old. After being diagnosed with depression Ann started taking antidepressants and continued to take various different ones over a 30 year period.  Ann came to me after stopping her anti-depressant within the last year and was quite depressed and unable to have any quality of life.  Ann had had various types of psychotherapy over the years.  But psychotherapy did not help her with her depression.  Prozac did help.  She became a good student of the psychological work and was a spiritual seeker who tried to practice meditation.  Although she was never able to quiet her mind enough to be good at meditation, she still tried daily.  She decided to get off her anti-depressant because she had done a great deal of research on the long term negative effects of using anti-depressants including causing brain damage.

The standard today leans toward short term use of these medications.  She was very concerned about what she was learning about the hazards of long term use of anti-depressants and made the decision to decrease the medication gradually with the help of her prescribing physician.  It’s important that she did this with the help of a medical professional because some people go cold turkey and can cause themselves major medical problems including heart failure and risk of suicide or homicide. Let me be very clear, it is not advised to reduce your anti-depressant or other psychological medications without the help of a medical professional!

After getting off her anti-depressant, Ann tried everything she knew to help her depression that was a natural remedy, including exercise, spiritual work, and additional psychotherapy.  Nothing helped enough to eliminate her depression. Ann was desperate when she called a former therapist in Atlanta and talked to her about her difficulty.  The therapist knew about the success of Neurofeedback and depression and told Ann she needed to find a Neurofeedback Therapist quickly and get help.  Ann had not heard of Neurofeedback so she began to do some research and found me at the Neurofeedback Center of Santa Fe.

During the Initial Evaluation I learned that Ann had been assaulted when she was 25 years old by two men at gun point who stole her car.  Ann was hit on the top of her head with the butt of a gun and was knocked unconscious. This was the beginning of her depression and anxiety.  She was assessed at a hospital but never recalled anyone telling her she had suffered a concussion.  After struggling for a few years Ann finally went on Prozac.   And over the years she tried different anti-depressants, because the longer someone takes an anti-depressant it becomes less effective.  Some were helpful and some were not.  Again, no medical or mental health professional ever assessed if she had had a head trauma. This is an interesting point because I’ve worked with hundreds of patients with TBI and MTBI (mild traumatic brain injury) in my practice and most of them have never been asked if they have had a head injury or a birth trauma by a medical professional.  Birth traumas are a head injury and can cause life-long problems that go undiagnosed.  These traumas to the brain can be a significant cause of the patient’s symptoms of depression, anxiety, sleep problems, migraines and head pain, impulse control, executive function, and cognitive problems.  In fact, many of the children we see have had a birth trauma and it created a problem for them with sensory issues, learning disabilities and/or ADHD.

Because Ann was wanting relief from her depression very quickly she was willing to work twice a day for two weeks straight.  We then reduced her sessions to twice a day three times a week and then to two days a week twice a day until she finished. She completed 40 sessions of LORETA z score Neurofeedback.  When she was finished she rated on a 1-10 scale her depression level at zero.  And anxiety at 1.  Sleep was a 2-3.  But, sleep was still changing since she was decreasing medication for sleep as we were doing Neurofeedback over this time period and was almost weaned off.  Fortunately she was not on a benzodiazepine, an addictive sleep medication.  She was getting 6-7 hours of good uninterrupted sleep at night and very happy about not being depressed or anxious. One piece of her description of how well she was doing, “My spouse says I never get overly stressed and anxious about my life circumstances any longer.  Things that used to be very upsetting to me now do not.” One big stressor was that she had no current job and had to take money from her retirement account to cover her Neurofeedback work.  Even this stress was turned into a different reality for her because she began to look at Neurofeedback as an investment in her health and her wellbeing that would help her to be more productive and to be able to have the right job.  Her 40 year depression was gone!  Ann also described work she was doing with a spiritual organization that was sponsoring a week long workshop for Rhodes Scholars from Afghanistan.  Ann was ask at the last minute to change her part of the workshop to a different topic.  This would normally have been a disaster for her to pull off.  And yet her report was “I have never done a better job at presenting in my entire life!  I was so on and capable of changing directions without being stressed and everyone was very complementary about my presentation. I could not have done this without Neurofeedback and your help.”

Ann had changed her life with the help we gave her at the Neurofeedback Center of Santa Fe. My experience with the people we help is that they never have to go back on medications if they do enough Neurofeedback to solidify their results.
Getting relief from depression is very important.  We are learning more from research about depression sharing a link to Neuro inflammatory and Degenerative Disorders.  Now there is evidence that depression belongs to the spectrum of inflammatory and neurodegenerative disorders.

Depression shares pathways and can be a causative effect of the development of other medical and neurodegenerative disorders.  It’s called “Neuro Inflammatory Oxidative and Nitrosative Stress (IO&NS) pathways.”  (Maes et al. 2011) You can see the full article on this link: https://www.researchgate.net/publication/51448988  Or in Neuro endocrinology letters · January 2011

What are the Neuro inflammatory and degenerative disorders?

As people age we see many diagnosed with these disorders.  It’s important to understand that depression is the genesis of and the result of many of these Neuro inflammatory and degenerative disorders. I often see people that have depression and other medical problems, IBS, psoriasis, chronic fatigue, or digestive problems. It makes me want to shout out to the masses how important it is to get Neurofeedback to get relief from depression because there is such a strong connection to other health problems.   And I mean relief not just decreasing the “symptoms of depression” with an anti-depressant.  I mean ending depression. People that receive Neurofeedback for depression will be less vulnerable to Neuro inflammatory and degenerative disorders.  We have seen people in our clinic with some of these disorders, stroke, Alzheimer’s, MS, and Parkinson’s where depression is also presented.

Over the last 18 plus years that I’ve been practicing Neurofeedback with many people that have TBI and Mild TBI is that depression is the result from these injuries.  And many have additional symptoms of anxiety, cognitive problems, executive function, impulse control, migraines, seizures and/or sleep problems.  Hopefully, more people with these symptoms will recognize that the bump on the head they got playing sports, or falling off the bunkbed as a kid, or the whiplash in their car accident or the fall on the ice may be the cause of their symptoms and seek Neurofeedback to rehabilitate and enhance their brain functioning.   I am so happy for Ann to have a high quality of life now without depression and anxiety.
Here is Ann’s first Brainmap (Qeeg) on the left showing high alpha frequency that causes depression.  And high beta frequency that causes anxiety.
And here is Ann’s last Brainmap (Qeeg) on the right after 40 sessions of LORETA z score training.  Notice the changes in Alpha and Beta that reduced and helped her symptoms of depression and anxiety.  Also notice the changes in Connectivity in her brain with reduced lines in Coherence and Phase maps.  Normalized connectivity helps with cognitive problems and other symptoms. 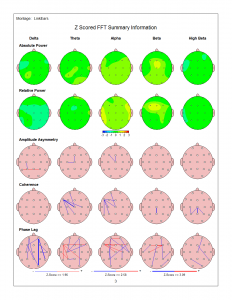 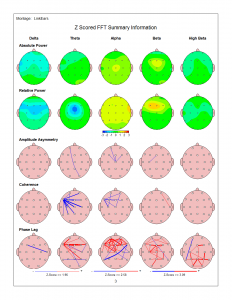 About the Author: Dr. Pamela Bell

Dr. Pamela Bell is a Neurotherapist trained in psychophysiology, counseling and psychology, and Bioenergetic therapy.

Request an Appointment
Go to Top